Back in May the Pokemon Company released a fun new app about the “weakest” Pokemon from the 1st Generation. For those you don’t know the series, Pokemon started as a role play game (RPG) where you train elemental animals to battle against other trainers in an alternate universe in order to become the best trainer out there like no one ever was.

The Pokemon Company has since expanded to creating games inspired by the world they created. From games where you play as a Pokemon (Mystery Dungeon

). They recently even had an app that took off called Pokemon Go where you get to be a Pokemon trainer in the real world, kinda. I have had a blast playing all of these games!

So when the new app, called Magikarp Jump, came out I was excited to try it. The story of this app focuses on a young trainer (you) who wants to train with Magikarp. These Pokemon, which look like Koi Fish, eventually turn into one of the stronger Pokemon of that generation, which looks like a sea dragon. If you have played the original version of Pokemon (or any of the core RPGs) you know that Magikarp only learns three moves…all of which are really weak. (This also depends on which game you’re playing too.)

Anyways, in this game you work with Magikarp to help them train to be able to jump high. After training with them, you get a chance to compete in a league to see if you have the highest jumping Magikarp. It’s so chill and makes for a great relaxer after a long day of wedding planning. (Okay, that doesn’t really apply to everyone, but still. It’s a fun app to play after a long day.) If you like Pokemon and always dreamed of being a Pokemon Fisherman, this is the app for you.

One of the highlights of the game is that the Magikarp can have unique designs. Usually Magikarp are just orange and yellow, but thanks to this app we get to see a variety of patterns that have never been seen before.

For all my arts and crafts creators, have you ever worked on a piece that you slowly add another detail and another detail until the piece becomes something that you didn’t realize you wanted to create but you really like how it turned out? That’s what happened to me with this piece.

Combining my love of patterned, zentangle-like designs with my obsession with Magikarp Jump helped create this cutie. I used a collection of Crayola Colored Pencils

, and a Recycled Sketchbook

to create this piece. 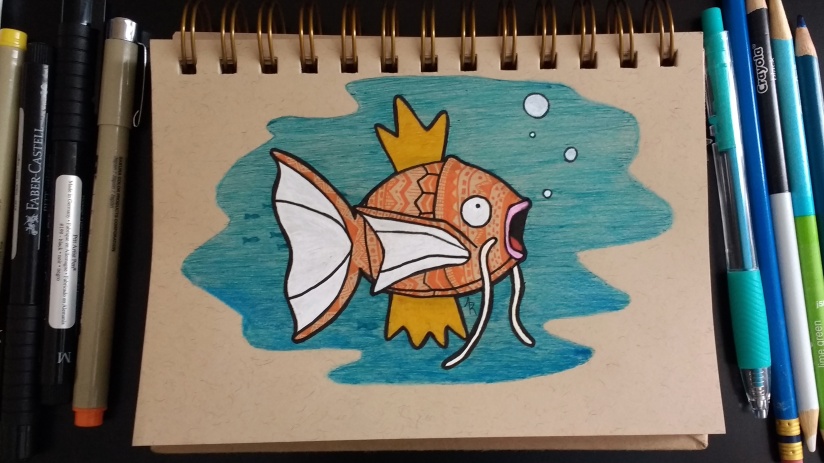 If you follow my Instagram, you probably have seen a little of the process over the past week of me working on this piece. I’m trying to share more of the behind the scenes of my artwork on there as I work on a project.

Thanks y’all for joining me as I geek out over this new-ish app. I hope you have a great weekend!

🍃 Leafeon 🍃
🕸️ Inktober 2018 🕸️
✨𝘼𝙡𝙖𝙫𝙖𝙧𝙖 𝘿𝙧𝙖𝙭𝙞𝙙 ✨
Get ready to set sail on your next adventure! This map is perfect for the lazy online DM or one who loves a good starting theme page for their campaign.
🧭 𝗣𝗶𝗿𝗮𝘁𝗲 𝗧𝗧𝗥𝗣𝗚 𝗜𝗻𝘁𝗿𝗼 𝗠𝗮𝗽 🧭
🗡 𝙈𝙚𝙡𝙞𝙣𝙖 🗡